Lanz currently serves as Chief Operating Officer, and has worked with the RIA since 2013. He has played a central role in growing the RIA’s membership base and strengthening its brand and communications initiatives over the last four years, the RIA said in a statement.

"We are very pleased to appoint Dustyn as the next CEO of the RIA," said Jason Milne, Chair of the RIA's board of directors and Vice President, Corporate Governance & Responsible Investment with RBC Global Asset Management. "Dustyn's industry expertise, market understanding and passion for responsible investment will build on the success that Deb has helped the RIA to achieve." He added, "Deb has done an absolutely incredible job of leading this organization since 2013, and we wish her the very best in retirement."

To ensure a smooth transition, Abbey will work closely with Lanz until her retirement at the end of the year.

Although Lanz has only been working in the RI field for four years, he has done an excellent job promoting responsible investment to Canadians, under the able tutelage of Deb Abbey. SRI Monitor believes he will be a strong addition to the world of responsible investing in Canada.
Posted by Doug Watt at 10:37 AM No comments:

Organized by U of T’s School of the Environment, last Tuesday’s session was filled with a huge amount of new learning, contextualizing and updates, some of which I will share with you here. And if you thought you had enough acronyms from SRI, well, let me introduce you to a whole bunch more!

The day began with a presentation on Paris and Marrakesh by Gray Taylor, introduced as ‘the godfather of Canadian climate change law’.


The COP (Conference Of the Parties) 21 Paris Agreement which was approved December 12, 2015 represents a worldwide consensus on addressing climate change.


Posted by Sucheta Rajagopal at 2:55 PM No comments:

The 2016 Canadian Responsible Investment Trends Report reveals that Canada’s responsible investment market is continuing to experience rapid growth. For example, total responsible investment assets grew 49% in two years to $1.5 trillion. Pension fund assets made up 75% of RI's growth, increasing by $374 billion since 2014. While most of RI's impressive growth is attributable to institutional investors, individual investor assets have nearly doubled in two years to $118 billion, a growth rate of 91%. Overall, responsible investing now represents 38% of Canada's investment industry.  Survey respondents are also optimistic about RI's future, with 80% predicting either moderate or high levels of growth in the next two years.

How to not spend it 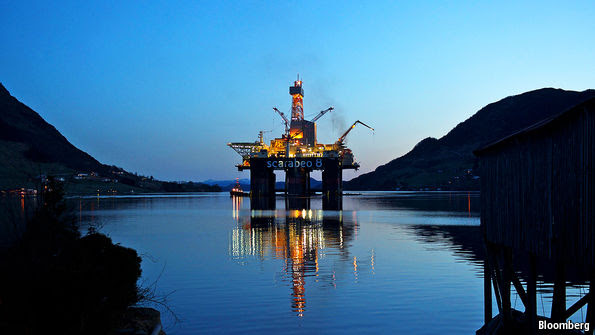 TWO decades after Norway’s government paid a first deposit into its sovereign-wealth fund, the country is learning how to manage a behemoth. The vehicle, which is used to invest abroad the proceeds of Norway’s oil and gas sales, has amassed a bigger fortune than anyone expected, thanks to bumper oil prices. As the direct benefits of oil decline—around 46% of Norway’s expected total haul of oil and gas is gone—the relative importance of the fund will grow. The annual revenues it generates now regularly exceed income from oil sales.
This week the “Pension Fund Global” was worth Nkr7.3 trillion ($882 billion), more than double national GDP. No sovereign-wealth fund is bigger. It owns more than 2% of all listed shares in Europe and over 1% globally. Its largest holdings are in Alphabet, Apple, Microsoft and Nestlé, among 9,000-odd firms in 78 countries.

In designing the fund, Norway got a lot right. Its independence is not constitutionally guaranteed, but it is protected as a separate unit within the central bank, overseen by the finance ministry and monitored by parliament. It is run frugally and transparently; every investment it makes is detailed online.
Other funds might copy those structures, but would struggle to mimic the Nordic values that underpin them. Yngve Slyngstad, the fund’s boss, says growth came “faster than anyone had envisaged”, and that a culture of political trust made it uncontroversial to save as much as possible. A budgetary rule stops the government from drawing down more than the fund’s expected annual returns (set at 4% a year). The capital, in theory, is never touched. Martin Skancke, who used to oversee the fund’s operations from the finance ministry, attributes the trust the institution enjoys to relatively high levels of equality and cultural homogeneity. It also helps that many rural areas recall poverty just two generations ago.
Yet expectations of the fund may change as Norway itself does. Tesla-driving Norwegians are now less shy about flaunting their wealth. Those under 50 have known only a world in which the 5.2m Norwegians are among its wealthiest people. Immigration is higher than ever, especially after an influx of Syrian refugees. 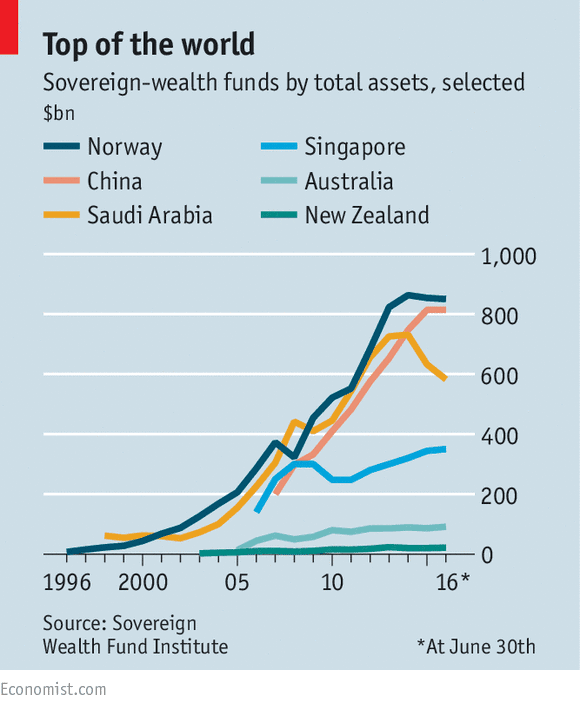 Progress, a populist, anti-immigrant party, has long wanted more oil cash spent at home. As a junior coalition partner since 2013, in charge of the finance ministry, it has curbed its urge to splurge. But in the first half of this year the government for the first time took more from the fund than it deposited from its oil revenues: a net withdrawal of Nkr45 billion. Recent low returns meant that the fund’s capital fell slightly, too.
It is too early to see any long-term trend, but some are worried. “It is very hard to have a huge sum of money at the bedside and to tighten your belt at the same time,” says someone close to the fund. Mr Slyngstad is sanguine but acknowledges that few democracies sustain sovereign-wealth funds: politicians always prefer higher spending and lower taxes. He denies ever feeling political pressure. But others’ appetites are evidently growing—if not to spend more, then to use the fund differently. One complaint is that relatively modest dollar returns on investments (5.5% a year since 1998) reflect too much caution among those who guide the fund’s strategy.
Sony Kapoor, a leading critic of the fund, argues that it “screwed up” in the past decade by failing to invest in emerging markets that were hungry for capital, and by ignoring unlisted assets, such as infrastructure. He says the fund missed out on “$100 billion to $150 billion” as a result. Worse, he says, its supposed caution in fact exposed it to high risk by concentrating its assets in rich economies.
Defenders of the fund’s strategy dismiss this criticism, arguing that poorer countries often offer too few suitable, big investment opportunities. But this is not the only criticism from Mr Kapoor and others. In a democracy, morality counts. The ethics of investment are debated ever more hotly. Politicians, NGOs and others increasingly say moral concerns should outweigh others, and even profits.
The fund refuses to invest in firms with products deemed unethical, such as tobacco or many sorts of weapons. It is also becoming more activist in the approach to its portfolio, divesting from those seen as grossly corrupt and flagging concerns over companies’ misuse of water and energy, or any risk that they benefit from child labour.
It is also getting more outspoken on subjects like high executive pay. It has said it will join class-action lawsuits against Volkswagen over the firm’s fiddling of fuel-emissions results. The fund has been instructed by parliament to help fight climate change. So 1% of its portfolio is in firms deemed to be green. It has divested from heavy polluters, firms involved in deforestation and, this year, from coal companies.
Such restrictions create dilemmas. The fund still invests in oil, for example: Royal Dutch Shell is one of its biggest holdings. Its ethical advisers argue that it can achieve more by promoting good practices within oil firms. But a former adviser admits the fund’s climate-change brief makes such investments a “paradox”.
In effect, the fund is exporting Norwegian values as well as capital. In the future it could turn against more products—sugar and fast-food, say, because of obesity. So far the fund’s managers see no serious financial cost from blacklisting 100 or so companies. But they do not deny that some ethical decisions do entail trade-offs. Their own shareholders, the Norwegians themselves, may not always let them do what is right rather than what pays.
From the print edition: Finance and economics

Posted by Sucheta Rajagopal at 2:01 PM No comments: